He played a banjo, and that was his thing and he was the best he could be. But it wasn't so much what he played. He taught men to sing.

And he wouldn't let them alone until they did.

There was a time when music was dangerous and governments were shaken and wars were made to stop. And he was a part of that. He knew that the danger was in the words, in the men singing the words. Together.

And he couldn't take it when Bob Dylan plugged in, when song became spectacle. The noise and the amplifiers and the electricity took all the danger away, all the power.

Primal music is about reclaiming that power. We'll lay Seeger's banjo aside and drum and cry our way through his music, through his words, and into that great stream of his generous passion.

God guide and protect us all and may He grant the Seeger family ease in this challenging time.

Posted by Ahmed Pierstorff at 10:57 PM No comments:

Getting the Word Out 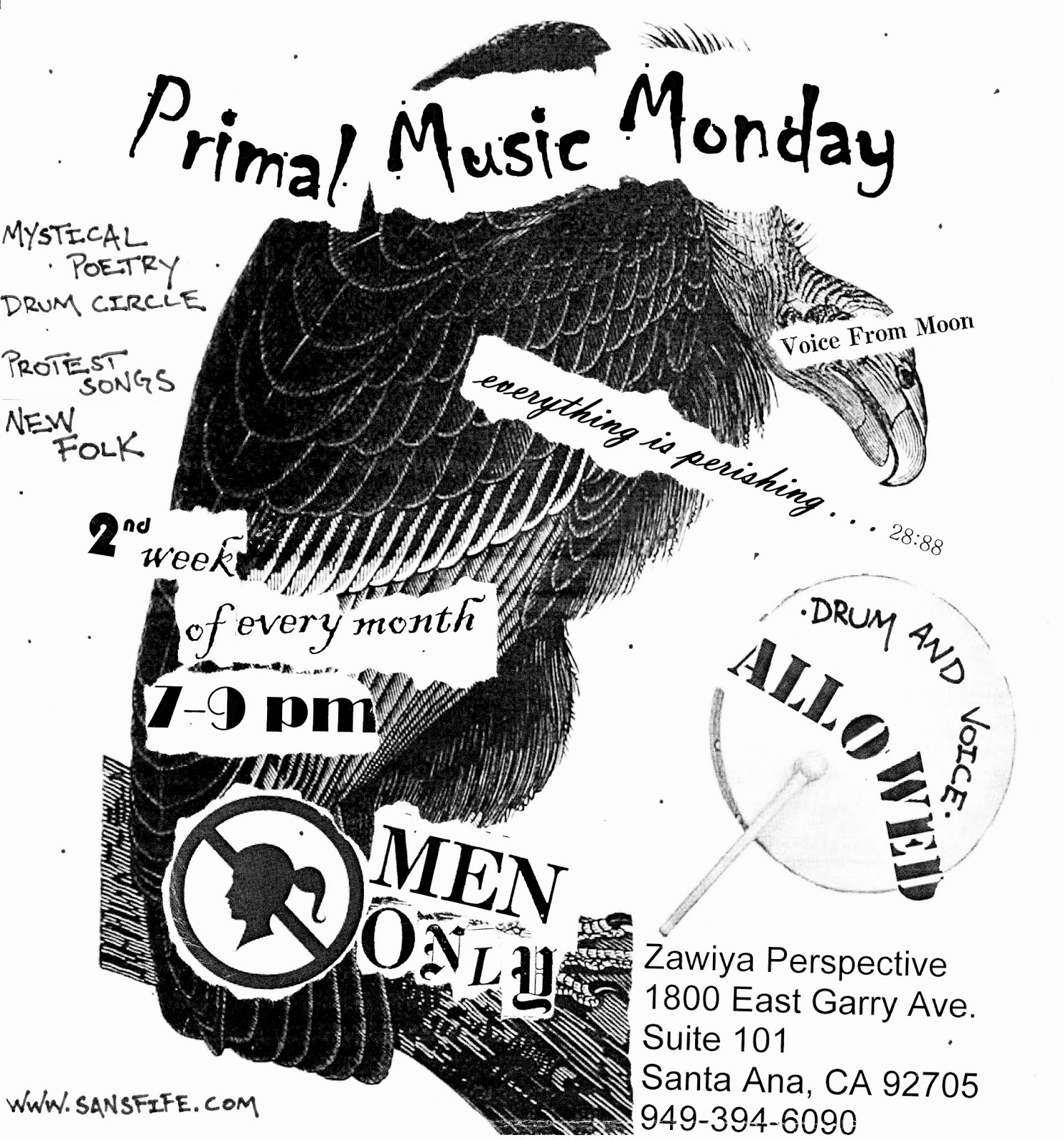 Inspired as I forever will be by the 80s punk aesthetic, I fiddled with copy machine and newsprint until this happened.

With any luck, it'll keep away all the right people.
Posted by Ahmed Pierstorff at 11:52 AM No comments:

With Allah's help and permission, we will gather for our inaugural Primal Music Monday on January 20th, from 7 pm to 9 pm at Zawiya Perspective:

We'll start off with a down and dirty frame drum clinic. The frame drum is an amazing gathering tool and I can almost guarantee a tight, locked-in rhythm circle within minutes of even newcomers picking up the drum. Show up and we'll prove it, insha Allah.

We'll move on to a round of tea before singing. The lift we'll get from the drumming and the warm relaxation we'll get from a good cup should have us ready to sing, insha Allah.

And sing we will, somewhere in the neighborhood of 5-6 Arabic qasidas. We'll work to select those pieces that have simple refrains to allow for increased participation, insha Allah. And if singing isn't your bag, bang a drum (in time!) and we'll love you for it.

At the end of the evening, we'll workshop an original composition, Tea.

The music and lyrics are here. Print, download, and practice.

In addition, or perhaps even as a substitution, I am inviting any and all to show up with any English language song for a group sing. Be prepared with lyric sheets to hand out and be willing to lead the songs you bring, insha Allah.

After all that (whew!), we'll settle in with more refreshments and just bask in how beautiful life can be, wal-hamdu lillah.

Finally, a quick reminder of the rules:

1) This gathering is for men only.
2) Show up groomed and smelling good.
3) Absolutely no tuned instruments allowed. Bringing your own drum is encouraged.
4) Sound recording devices are fine, but no photography or video, please.

Looking forward to an evening with you, insha Allah.
Posted by Ahmed Pierstorff at 10:30 AM No comments:

A Primal Moment with Nader Khan

It's happening, men. And here's the proof, from the Pocono Mountains in Pennsylvania:

Read about this incredible moment (and get the translation!) here.
Posted by Ahmed Pierstorff at 9:40 AM No comments:

Toward an American Diwan

In the eastern Muslim world, a collection of poetry is called a diwan.

Qasida Monday has been about bringing the majesty of these diwans to the attention of the men in our local community. We can read this poetry, sing it, and reflect on what it means to invest and ground ourselves in deep, deep tradition.

If we know Arabic.

Drumming is a big part of our gatherings, and that can help many of us lock in even if we don't know the language. We can still be a part of the experience, and there is serious merit in that.

There is something else to consider, though.

Much, if not all, of the sacred poetry that we read is set to traditional Arabic folk melodies, tunes that were and are very familiar and much beloved by the people of that region.

We're not from that region.

If we are going to get serious about building community, then we need to think very seriously about what we are trying to accomplish by doing so. Are our attempts at fostering community really about memorializing a tradition so that a select group of initiated individuals can feel good about coming together around a common interest?

Nothing wrong with that. There are clubs for people who collect stamps and look out for birds. Those are communal activities, for sure.

It's not a model that I want to perpetuate, though. And the reason, quite simply, is because I am Muslim.

And Muslims have an unfortunate tradition of social isolation that has played nicely into the hands of those with a vested interest in tagging us as alien. And here, Muslims have this crazy idea that Islam is some timeless, universal phenomenon. Then how long will we continue to import values and traditions from far off times and places that have little relevance in our current cultural context?

And our current cultural context, by the way, sucks in a lot of big ways. This is no argument for mainstream alignment. We need a revolution, prime.

The entertainment industry is keeping us down. It's tearing us apart, and we'll talk a lot about that as we go. But it's the absolute truth and we need to confront this.

But not by running to the deserts of Arabia.

Rather, we draw on the deep roots of our homeland to show our people a better way. The throbbing, ancient drum, the shrieks and howls of our indigenous people, the bluesy moan of a black prisoner at work, the syncopated rhythms of the urban poet . . . it's all there waiting to be pulled together, reified and dropped like a sonic bomb- the American Diwan.

So no more Qasida Monday.

It's primal music from here on out and you are totally invited, whoever you are.
Posted by Ahmed Pierstorff at 7:06 PM No comments:

The 26th annual All-California Convention is happening in San Pedro this weekend, January 18th and 19th.

Check it out!
Posted by Ahmed Pierstorff at 7:25 AM No comments: